Friends and fellow travelers provided no recommendations, only options. If you think you can handle it, find yourself a place to stay in Fes’ ancient quarter and drink it all in. If not, there are plenty of places with familiar conveniences in the French-era Nouvelle Ville outside the walled city. I wimped out, at least initially. I’d only been in Morocco a couple of days and was on my first trip to its imperial capital. But the moment I stepped into Fes’ old city or “medina” I knew I had made the wrong decision. This place had Moroccan heart and soul cranking on all cylinders and there was no better spot to camp down and savor the delights of this North African nation.

I resolved to move down into the medina but first wanted to get a feel for the place. Given language issues and the old city’s general mayhem, I figured the best way to learn something and not get hopelessly lost was to hire a guide. Official guides start at around $15 for half a day and are available through major hotels or the Syndicat d’Intitiative, Morocco’s national tourist office. The office was closed when I swung by but a guy calling himself Abdul saw me coming and immediately offered his services. He claimed to be “official”, even showed me a piece of plastic that confirmed this (in Arabic) but by the third or fourth visit to one of his “cousin’s” stores I had my doubts. Regardless, he spoke good English and helped me get my bearings.

There are actually two medinas in the modern city of Fes—Fes el Bali and Fes El Djedid—each established at different times in imperial city’s colorful history. Built in the 13th century, Fes El Djedid (Fes the New) is essentially a planned city with a palace, several gardens, and an old Jewish quarter (now largely populated by Muslims). However, the star attraction is Fes el Bali (Old Fes), a bustling mix of markets, mosques, and workshops that makes their similarly preserved quarters in the U.S. feel like ghost towns. Established in the 8th century and now a UNESCO World Heritage Site, Fes el Bali’s roughly 1.5 square miles house some 200,000 people, countless businesses, and upwards of 300 mosques. Its labyrinth of tiny roads and alleyways are almost entirely free of motorized traffic, making it one of the largest contiguous car-free urban areas on the planet.

Locals and tourists visit the Fes el Bali for a lot of reasons: some study at the Koranic schools, others browse or staff its myriad shops and souks (markets). But I suspect many come for the sheer spectacle of it all—the unfiltered, unstaged humanity. This is Times Square meets 9th century Maghreb, a heady stew of stern piety and frenetic consumerism, all played out in a medieval environment that has changed little in hundreds, if not thousands of years.

My tour started at the Ftouh entrance, a major taxi and bus stop at what is essentially the lowest point in the ancient city. This is relevant only in that Fes el Bali sits on the side of a valley and anyone traversing its streets needs to be prepared for some hill walking. If you get tired, your only recourse is to hitch a ride on a donkey, and usually those are weighed down by gas cylinders, coke bottles, or some other merchandise. Fortunately, the narrow roads combine with the three and four-story buildings to block out most of the sun, keeping the ancient city relatively cool.

My introduction to Fes el Bali was a feast for the senses, and in some cases a feast that had been left at room temperature a bit too long. I passed through smoky silver and pewter workshops, butcher shops with camel and goat heads hanging in front, and markets selling spices and an assortment of pharmacological products, some purporting to be aphrodisiacs, others claiming to induce magical spells. Women in fashionable western clothing rubbed shoulders (literally along those miniature roadways) with women dressed in the most conservative Islamic dress. Men I had seen in suits at the Fes train station now strode proudly along medina streets in full length Moroccan jellabas (cloaks).

I had heard of but wasn’t fully prepared for the tanneries. For most of the past several hundred years Fes was famous for its leather goods and its tanneries still function, representing one of the most fascinating and wretched places you’d ever want to put on your travel itinerary. Leather workers toil waist deep in vats of ink partially composed of animal waste (I was told it was pigeon droppings). The stench is truly vile; yet the image is striking and for many visitors the tanneries are one of the biggest attractions in Fes. Leather shops surrounding the tannery provide galleries for visitors to view the laborers, and include some mint leaves for those not able to stomach the smell.

Regular calls to prayer by the muezzin remind you that you are in a Muslim setting. It’s a good thing too, because it’s difficult to pick out religious sites from all the other structures squeezed into Fes el Bali. Abdul showed me two—the Kairouine Mosque and Medersa Bou Inania—which are among the most important Islamic institutions in the Arab world.

Medersa Bou Inania is a koranic school built in the 14th century. Recently refurbished, it is the only functioning religious institution in Fes accessible to both Muslims and non-Muslims. The flawlessly decorated structure sits square in the middle of the bustling medina but manages to keep out the mayhem. Abdul guided me through the school’s immaculate courtyard with its carved stucco, ceramic tile work, and black Arabic script intricately carved into its cedar beams.

Dating back to the 9th century and doubling as an institute of higher learning, the Kairouine Mosque is the second largest in Morocco and arguably the oldest university in the Muslim world. Like many of the structures in Fes el Bali it looks a lot better from the inside, creating a problem for non-Muslims who technically cannot enter.  Abdul briefly sidestepped those prohibitions, showing me some of the interior, including its ornate and active library.

Breaking up my tour were the requisite visits to Abdul’s “cousins'” stores. I ended up spending a bit of time in two: One sold carpets, the other “pharmaceuticals.” I bought a carpet, or some kind of prayer mat, reputedly made by some local tribeswomen. The pharmacist seemed primarily interested in selling me spices—cumin, saffron, turmeric and something he explained was for women who didn’t know how to cook. He also ran, through the labor of a female cousin, some kind of massage service in the back of his shop. I bought some spices, which I put to good use when I returned home, but declined the back rub.

Not done with me, my spice salesman berated me for staying at a hotel outside the medina. “There is nothing in the Nouvelle Ville. Inside the medina you find the soul of Fes.” I couldn’t agree more. He then hooked me up with another cousin who owned a traditional Moroccan home or “riad” that had been converted into a small inn. This type of accommodation is common in Fes with some of the more upscale options costing hundreds of dollars a night. Mine was nothing to look at from the street but, once you made it past the dimly lit alleys and redundant security, it opened up into a stunning blue and white ceramic tile courtyard with natural light streaming in from a glass ceiling three stories high. There were rooms on all three floors, all looking in over the courtyard. My room was only a hundred or so feet from the main medina thoroughfares—close enough to jump into the action but comfortable enough to take a Moroccan-style break when needed.

For the next few days I perused the streets of Fes, which being virtually alcohol-free and overrun with coffee shops never seemed to run out of steam.  I dined on traditional Moroccan foods—cous cous, tagine, and Bastila (pigeon pie)—haggled with merchants, and slowly became acclimatized to the pace of the city. I happened to be there during the Annual Sacred Music Festival which meant a free Moroccan concert every night and any number of high quality daytime shows to take in. And when I needed a break from it all I would sneak over to the sumptuous Palais Jamais hotel for a rare beer and a touch of luxury.

The video below captures some of life in Fes El Bali. The back half of the video is not Fes but Marrakesh.

The photos below are in the video but take less time and bandwidth to go through. 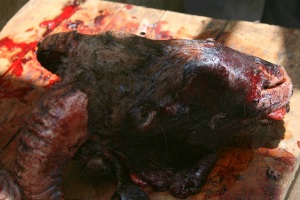 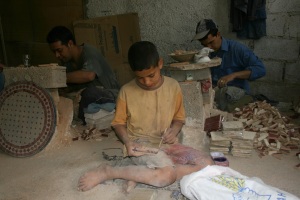 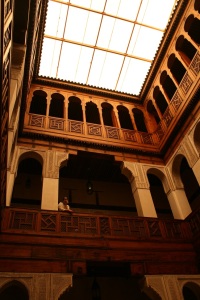