No martinis for Mount of Olives ascent 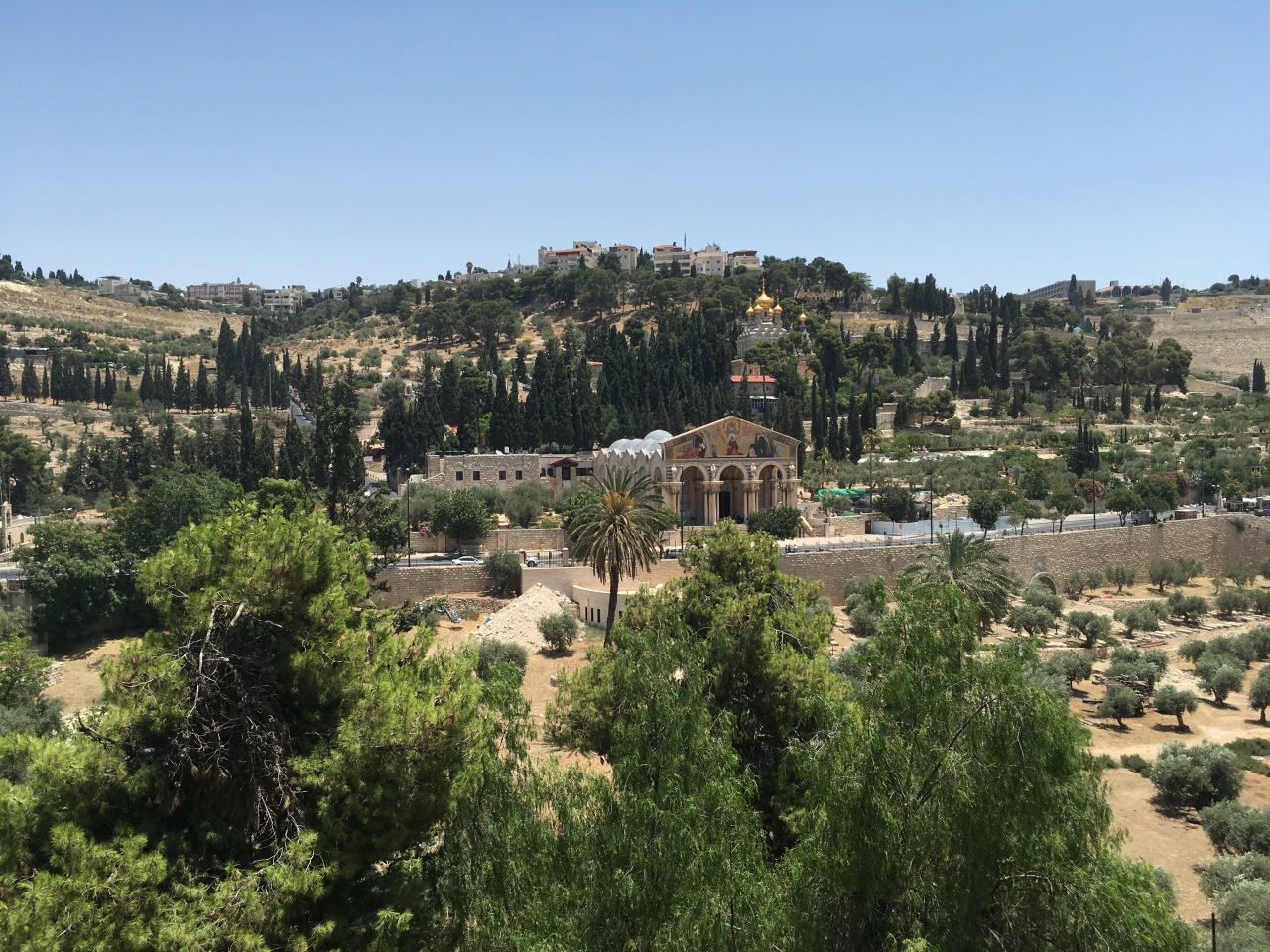 Mount of Olives as seen from the Old City of Jerusalem.

I’m guessing, but Mount of Olives is probably one of the few landmarks around Jerusalem that might actually still look like it did in biblical times. It remains relatively undeveloped – even has retained some olive trees. A garden reputed to be Gethsemane sits at its base. And a 3000-year-old Jewish cemetery still sprawls across its southern flank, despite centuries of foreign occupation and ongoing desecration.

To call it a mountain is a bit of a stretch. Rising roughly three hundred feet above the adjacent Kidron valley, Mount of Olives looks more like a medium-sized hill.  It’s part of three mountains — Mt. Scopus and Mt. of Corruption being the other two — that make up the Judean range and serve as a watershed to the neighboring Judean Desert.

As it was only a few minutes walk from the Old City of Jerusalem, I decided to check out the fabled mount, starting my trek at the its base, next to the Garden of Gethsemane. A wiser man would have taken note of the temperature (mid to high 90s), notable lack of shade, grade of the ascending road, and large number of taxis loitering around and chosen an automated route up. Instead I walked, taking a narrow, apparently nameless road that looked to be the fastest way to the summit.

Bad decision, apparently made by a few others before me who now lay strewn across the road’s tiny sidewalk, gasping for breath and straining what few drops were left out of their water bottles. 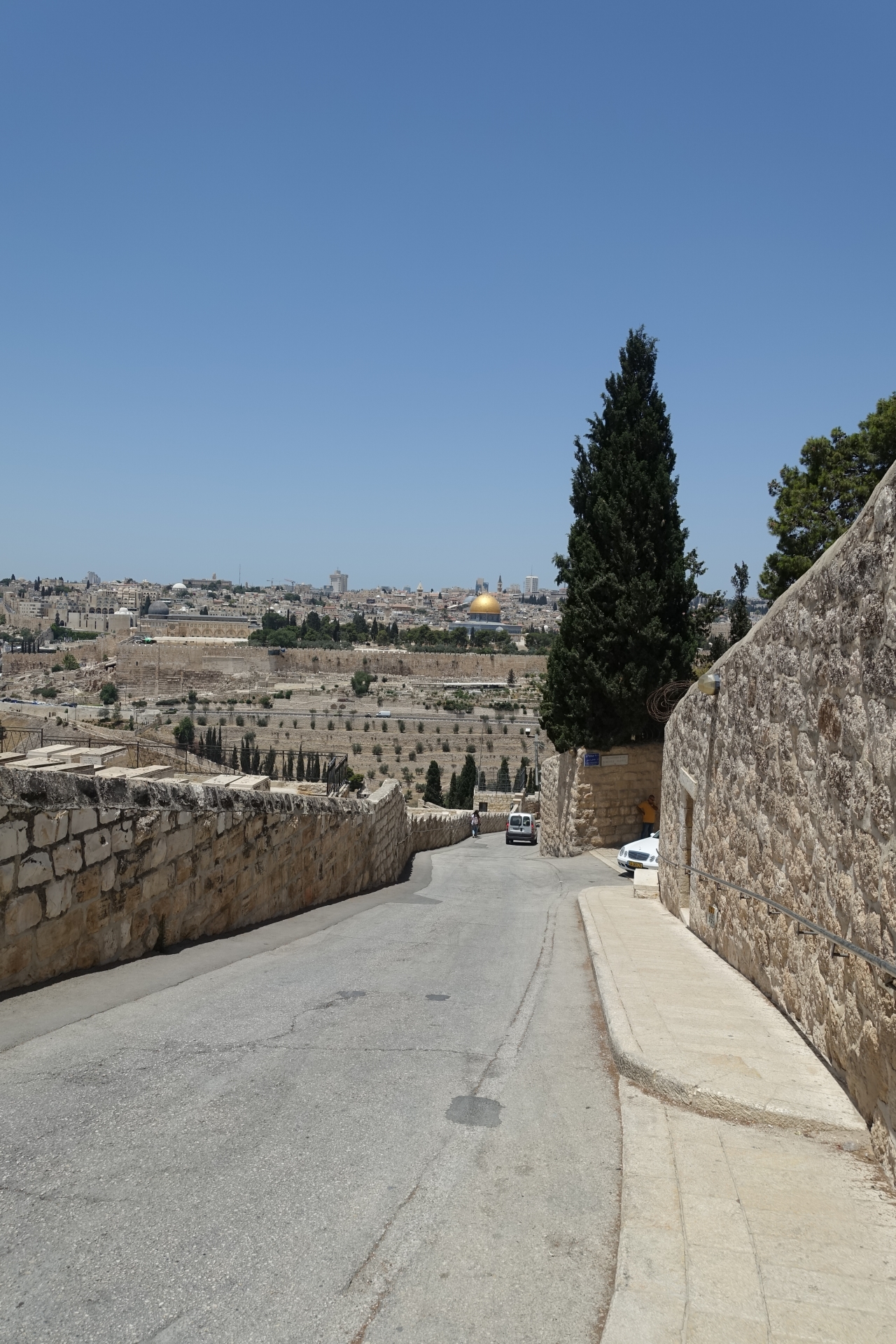 My steep, sunbaked route up the Mount of Olives.

A logical itinerary would have been to break up the ascent and stop in at the many landmarks there were along the way up — the ancient Jewish cemetery, Russian Orthodox Church of Mary Magdalene, tomb of the prophets to name just a few. But logic wasn’t going to play any role in the morning’s activities — my focus was getting to the top, hopefully without having some sort of pulmonary event. 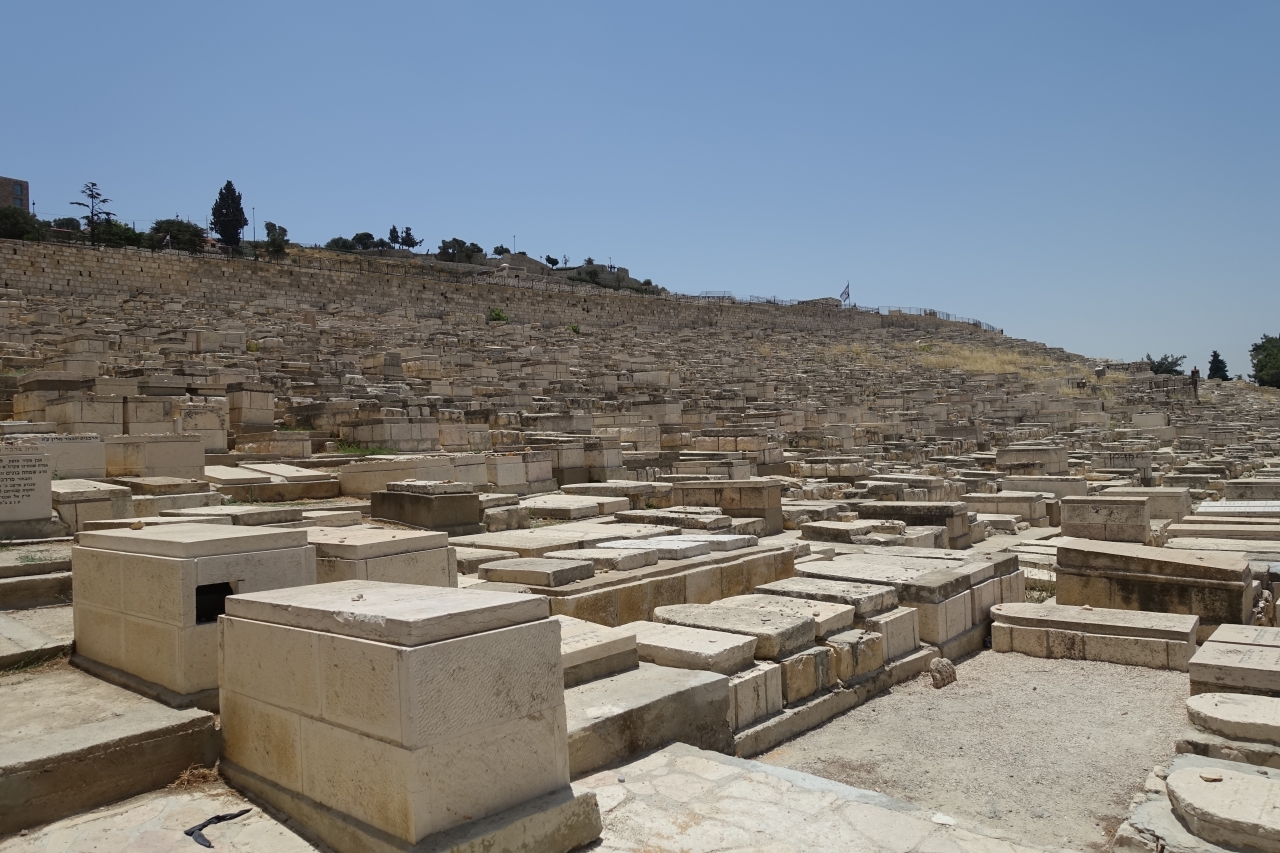 I’m not sure what was driving me. Climbing to the summit may be a pilgrimage for some but it has limited biblical or historical significance, at least compared to its bustling neighbor to the west. I got one possible answer at the summit, where I stumbled across the Chapel of the Ascension. This is believed to the be the spot where Jesus ascended into heaven after his resurrection and includes a slab of stone that reputedly contains his right footprint. That seemed about right. There’s nothing in the Gospels bearing witness to Christ’s ascension from the Mount of Olives summit but given my delirious state I could imagine countless pilgrims reaching the Ascension Chapel feeling ready to meet their maker. 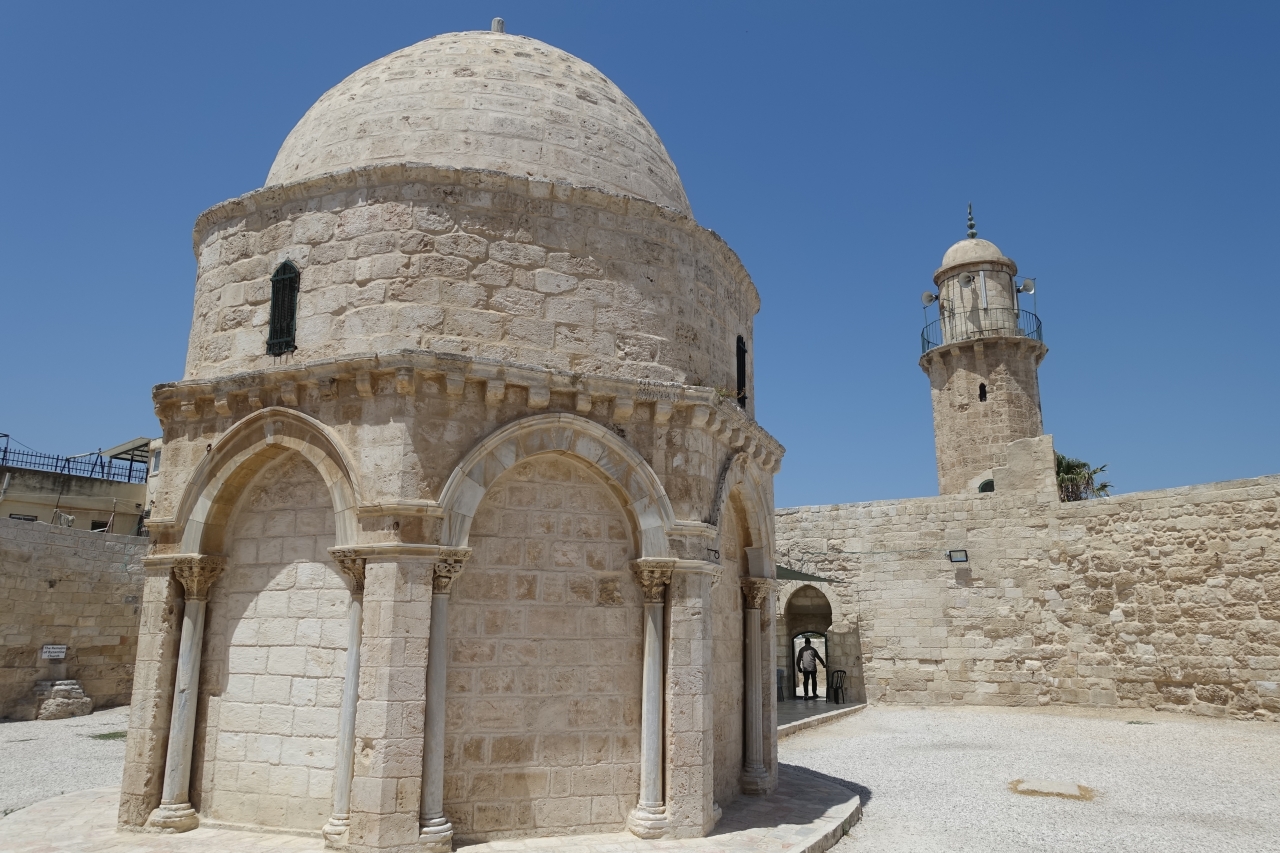 Chapel of the Ascension

Needless to say, retracing my steps was a good deal easier and allowed me to visit some of the numerous religious sites that are part of the Mount of Olives landscape.  The Pater Noster church, built on the site of a 4th century Byzantine basilica, seems like a shrine to the Lord’s Prayer and in fact a church built on the site during the crusades was devoted to the prayer’s study. Plaques containing the Lord’s Prayer in multiple languages are displayed across the church grounds, even from countries not immediately associated with Christianity. 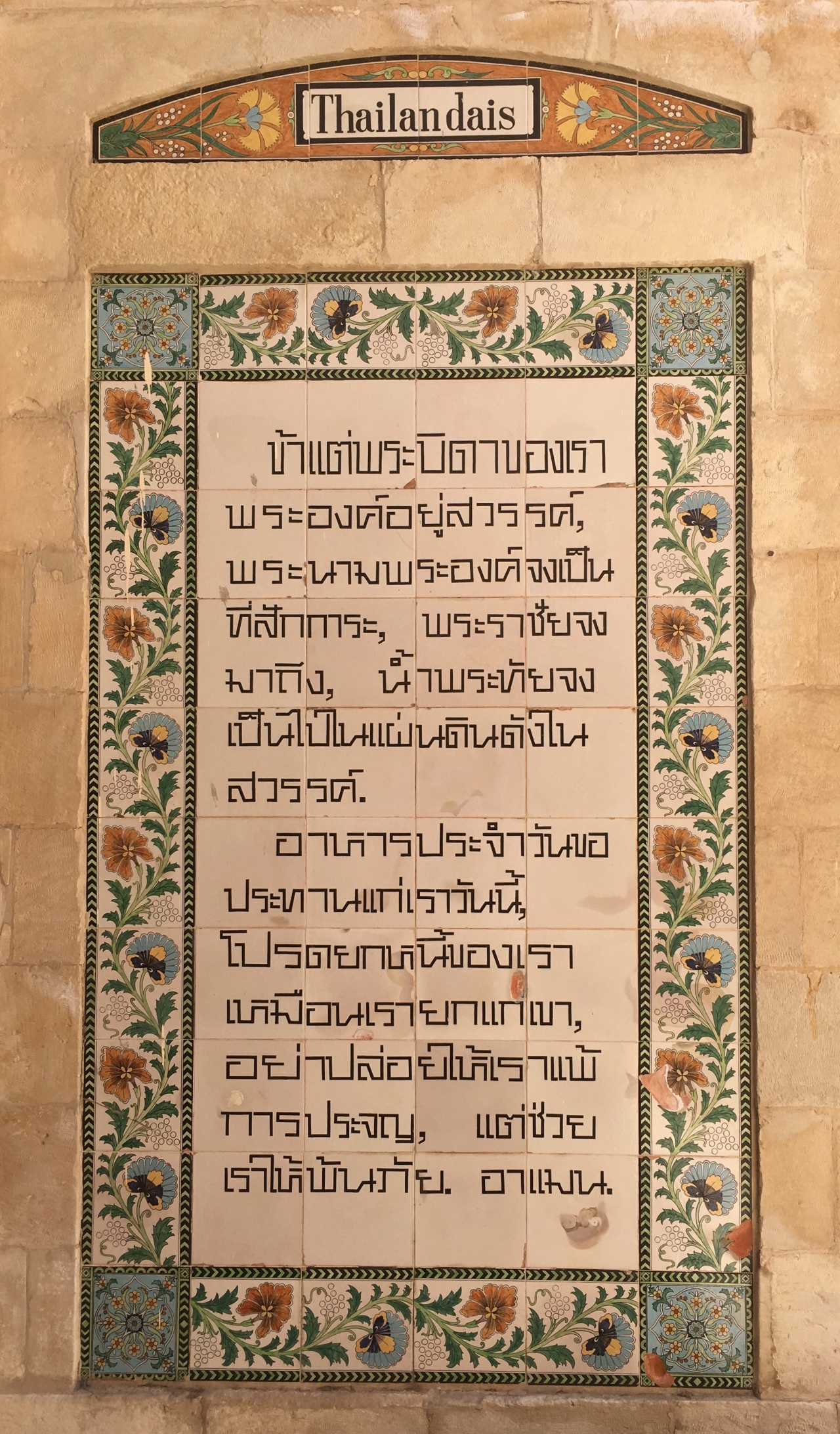 Nearby, the Tomb of the Prophets is a spooky catacomb of religious significance to the Jewish community and accessible only if you happen to have a flashlight (smart phones will do). A nearby look out provides arguably the best views of the Old City – my choice of spots to ascend to heaven. 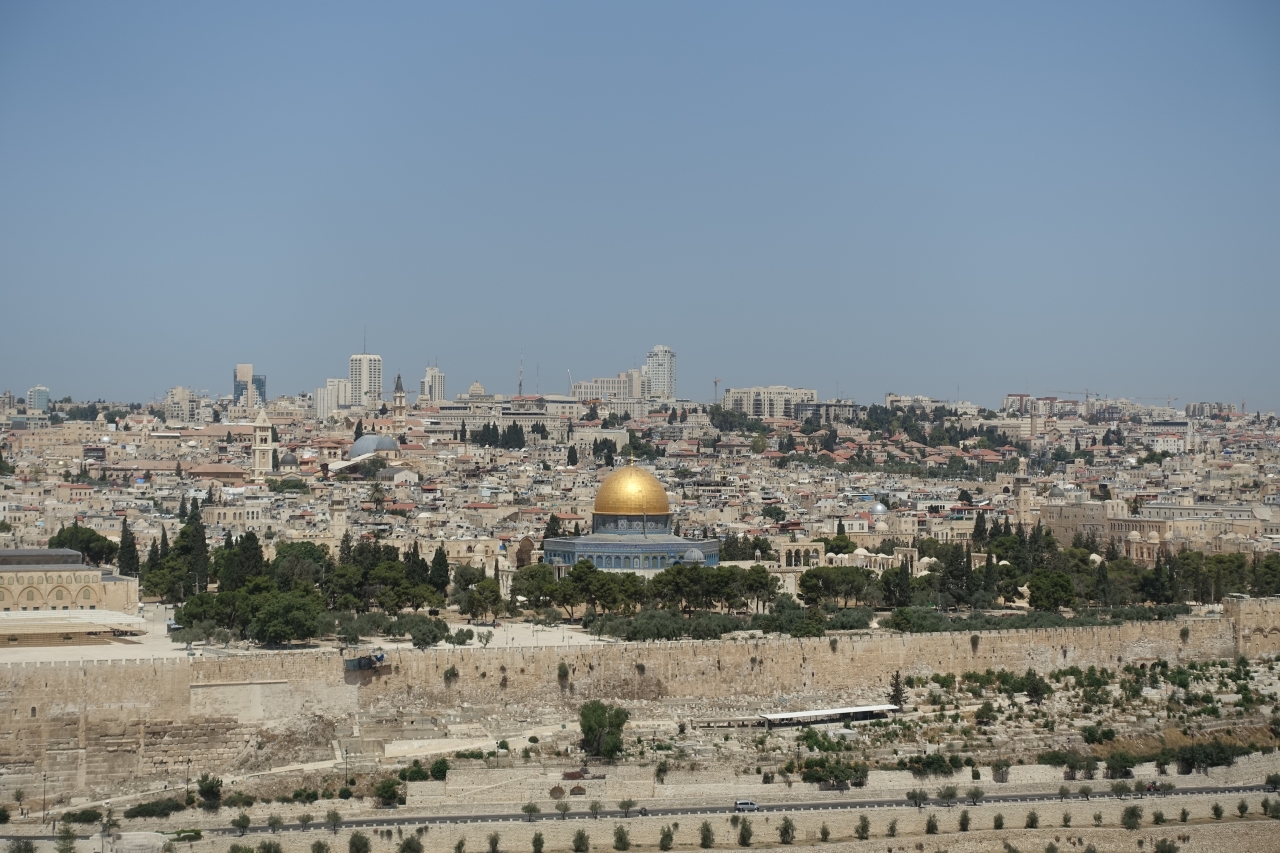 Jerusalem as seen from the Mount of Olives lookout

Descending further I was looking forward to checking out the churches I had blanked out on my way up (Mary Magdalene, Dominus Flevit) but they all seemed to be having some kind of midday siesta and had locked their doors. An enterprising cab driver, sensing my disappointment, suggested I go with him to Jericho instead. I declined. The Garden of Gethsemane beckoned and I knew its doors were still open. 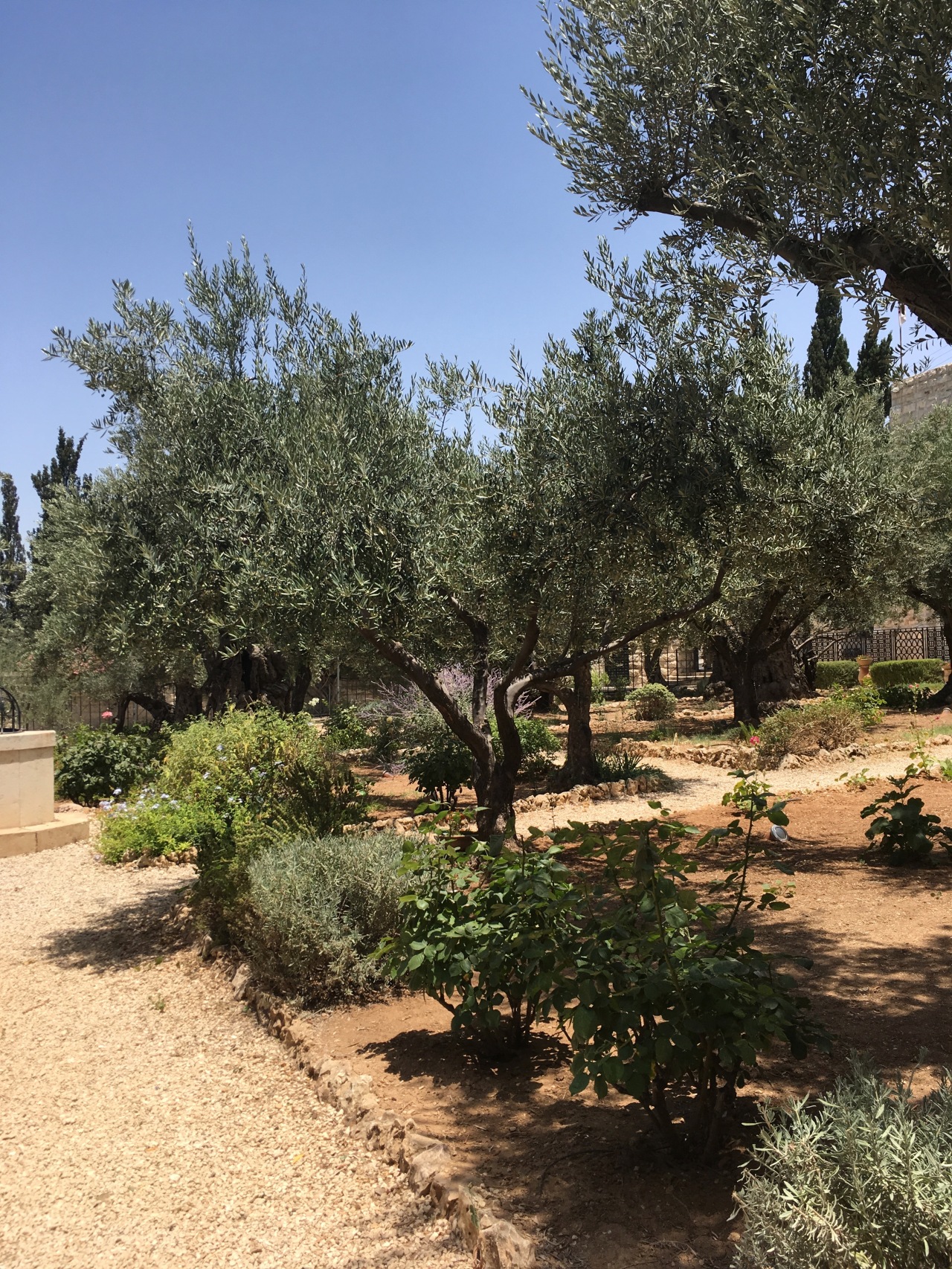 Olive trees in Garden of Gethsemane

Despite its storied associations, gethsemane is just a Greek take on the Hebrew word for olive press, which follows given the trees that were ubiquitous on the hillside at the time of Christ and still remain in the garden itself. The grove of olives trees is a pleasant place to stroll and reflect – and given the age of the trees, likely little changed from the time of Christ’s final prayers. Given the challenge of the nearby ascent, an enterprising mixologist might consider setting up a martini bar in the vicinity to reward over-enthusiastic pilgrims who had successfully made it to the top and back. That, or anyone looking to take the edge off.

Not to be. The magnificent Basilica of the Agony is the only other non-olive related entity in the area. Intrigued by the church’s name and not yet fully recovered from the my tussle with the Mount of Olives I did a bit of research. Apparently the church draws its name from Luke ‘s description of Christ’s final hours on the Mount of Olives. “And being in agony he prayed more earnestly; and his sweat became like great drops of blood falling down to the ground.” That sounds about right. 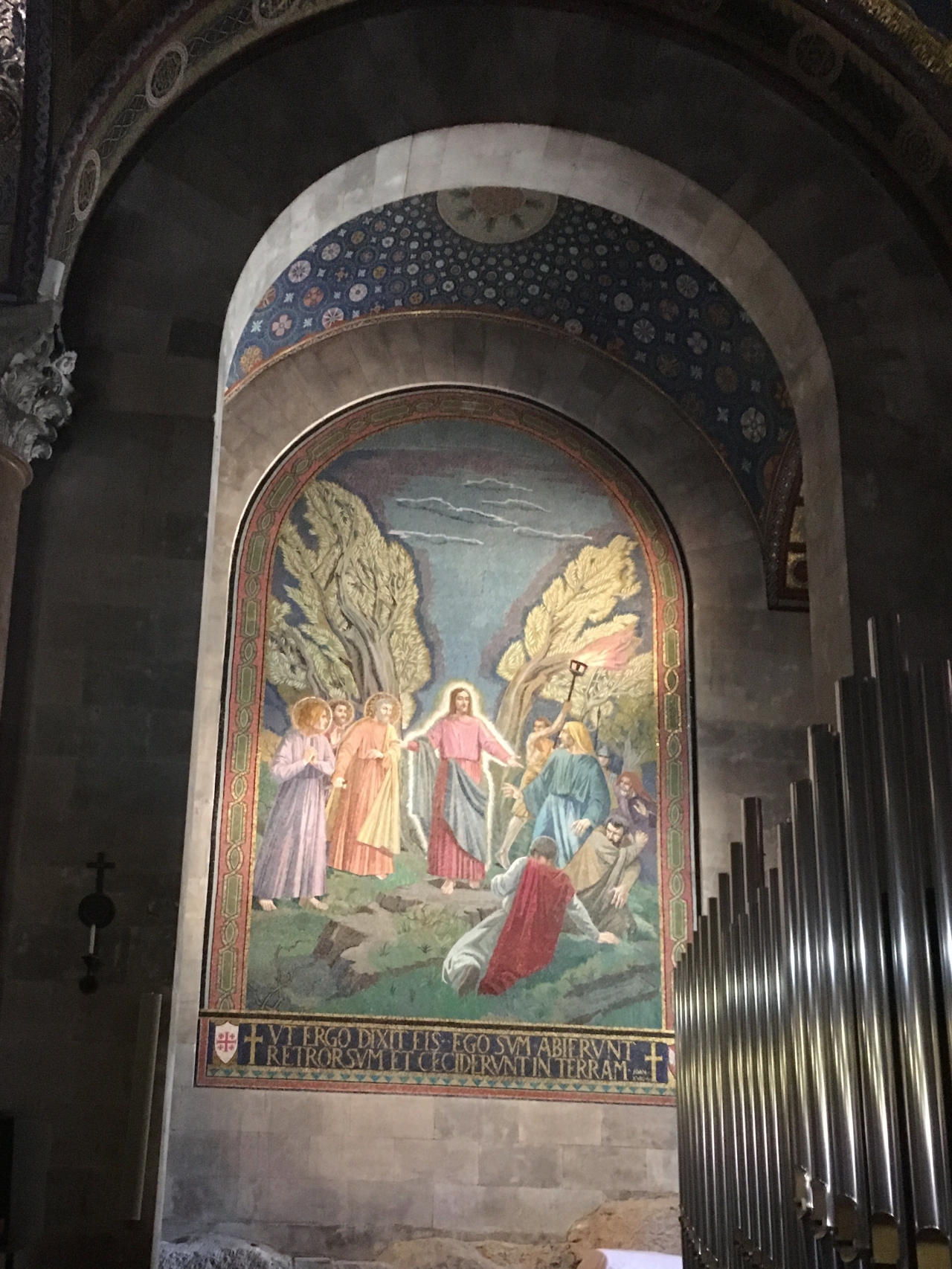