I stumbled, literally, across New Zealand’s hot springs while killing some time waiting to check into my Rotorua motel. I had taken a stroll to the Maori village of Ohinemutu on the shores of Lake Rotorua when I accidentally stepped in puddle of scalding water. After the pain receded, I realized this was not some kind of urban anomaly. Across the small community, hot, sulphur-rich water was flowing through backyards and out of cracks in the street pavement, eventually making its way to the lake. Hot springs are nothing new to me, but my experience had them confined to spas and controlled public spaces, not running freely through quiet, unassuming neighborhoods.  Intrigued, I looked into the phenomenon.

New Zealand sits atop the convergence of the Australian and Pacific tectonic plates. In the south, the interaction of these massive bodies has resulted in the towering mountains familiar to Hobbit movie fans; in the north, particularly around the Rotorua area, the results have been volcanic activity, an enormous amount of heat, and a seemingly unlimited store of very hot ground water.

I found no shortage of fascinating places around Rotorua to witness this environment up close. At the Waimangu volcanic valley – the youngest geothermal system in the world –  a 2-mile hike took me past Frying Pan Lake, a bubbling cauldron of mineral-laden water, said to be the planet’s largest hot spring. Nearby, at the more cheesy Wai-O-Tapu “Thermal Wonderland” shorter marked trails allowed me to easily take in the volcanic area’s extraordinary collection of bubbling and spewing pools, craters, and steam vents. I arrived early, which meant I missed the crowds and could see how the cool morning temperatures added to the steamy drama.

It turned out I didn’t need to go too far to get a reasonably complete snapshot of the region’s geothermal activity. Across the street from my motel was Kuirau Park, the site of frequent small volcanic eruptions and host of a variety of bubbling and steaming geothermal phenomena, all well-marked and free to the public. With the temperature hovering around freezing, and a stiff breeze randomly tossing thick steam across the park’s heated lakes, walking through the area was surreal. Despite having to scrape ice off my car on that July day, it was the first time I could honestly say that winter was the preferable time to visit New Zealand’s North Island.

The video below captures some of my experience in Kuirau Park, as well as stills and clips from Ohinemutu, Waimangu, and Wai-O-Tapu.

The pictures below are all from the video but take a little less time and bandwidth to go through. 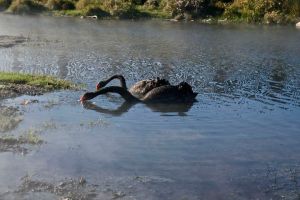 Black swans near Maori village of Ohinemutu by Lake Rotorua 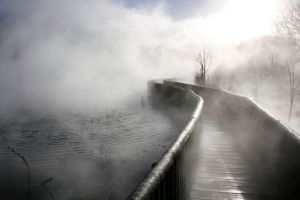 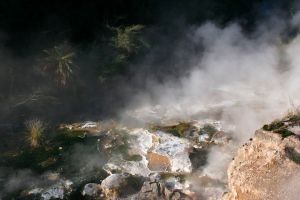