It’s hard to imagine a more choice retreat than Washington’s Olympic Peninsula. Perched on the far northwest corner of the U.S. mainland, it stands as one of the last places in the lower 48 to be surveyed and is dominated by the remote, 1,400 square mile Olympic National Park. With its verdant rain forests, deep blue lakes, snow-capped mountain ranges, and miles of empty beach the peninsula has all the markings of a great escape.

Escape was foremost on our minds as my wife and I drove south down Washington’s Interstate 5 toward Olympia and the gateway to the peninsula. An endless stream of bottlenecks followed gridlocked traffic with no apparent cause. We started to worry when even driving west into the heart of the peninsula initially offered no relief. Had we been misinformed? Had the scourge of modern day life caught up with one of the last refuges in the country? 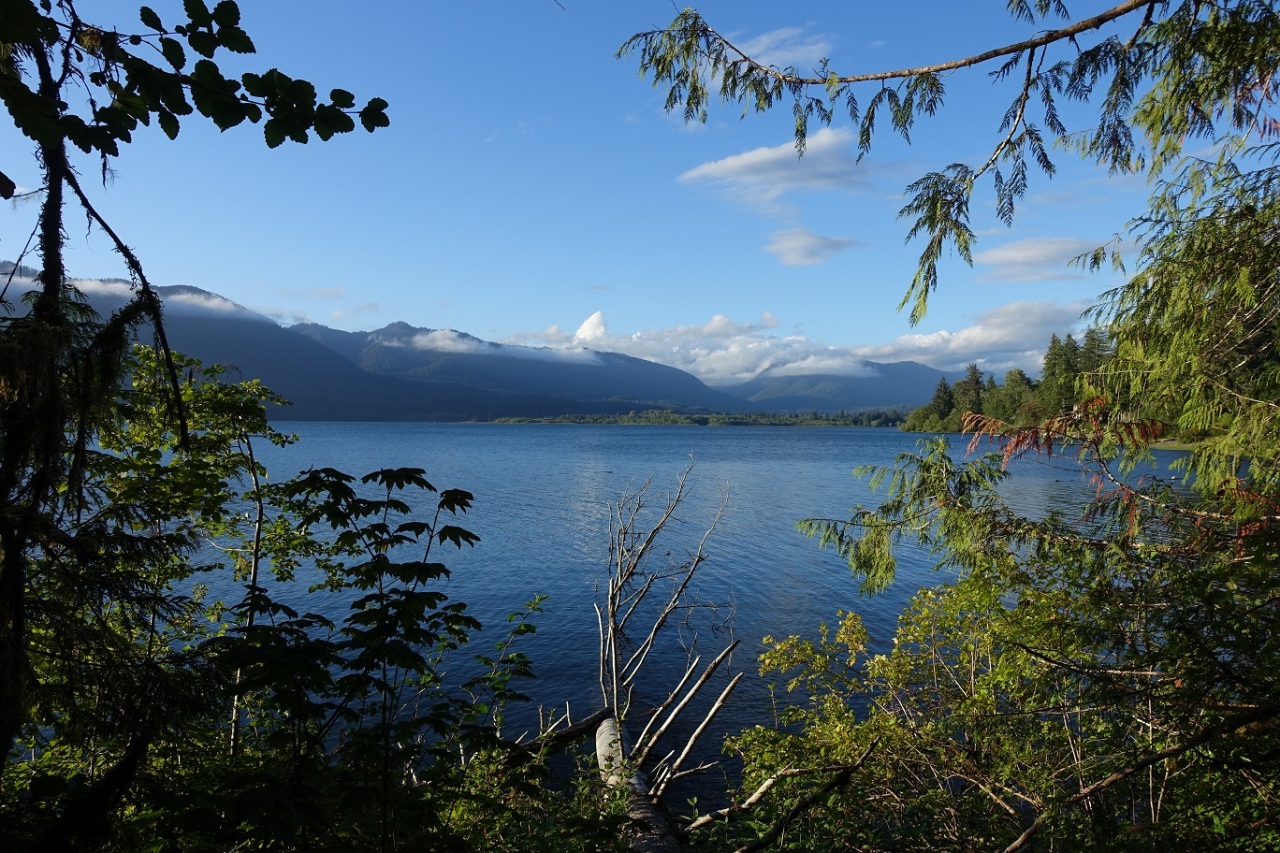 No, it hadn’t. As highway 101 drifted northward through the sleepy lumber towns of Aberdeen and Hoquiam the cars disappeared, as did most signs of human activity. There were a few signs of life – small homes, abandoned logging activity, the occasional dormant business – but that was the extent of it. Clouds obscured the towering peaks of Olympic National park to the north. Cell phone connectivity was spotty at best. This is what we were looking for.

Our immediate destination was Lake Quinault and its eponymous lodge, a handsome, 100-year-old relic that looks like a throwback to a time when taxidermy seemed to play a more central role in the holiday maker’s itinerary. Built in 1924 and now listed in the National Register of Historic Places, the 91-room facility sits on 1.3 acres of land and comes complete with a bar, restaurant, lounge, pool, and hot tub. Outside it offers boating (kayaking, paddleboards etc.) and  various lawn-based activities (horseshoes and other throwables).  And for the less active there are plenty of Adirondack chairs to sit in if you just want to while away your time staring over Lake Quinault.

But sitting and staring were not what we had come to do. The lodge sits in the heart of the temperate Pacific northwest rain forest and we had come to explore. While technically part of the National Forest Service and the Quinault Indian Reservation (and not part of the Olympic National Park) the area around the lodge has well-maintained and interconnected trails that allow visitors to take in as much, or as little, of the forest as they wanted. And Olympic National Park is not far off, accessible by lightly traveled back roads that barely announce you’ve arrived inside the park.

This corner of the world is all about rainfall and the diverse ecosystem the precipitation supports. The region annually gets more than 100 inches of rain a year and made no exception for our visit. Our first full day greeted us with intermittent drizzle, occasional heavy rain, and temperatures barely above 50 degrees. Undeterred, we headed into the woods. What could be more authentic than a romp through a rain forest in a downpour?

We started on a trail that runs adjacent to Lake Quinault’s south shore, meandering west from the lodge and taking in striking views of the lake and the surrounding mountains. After about a mile we hooked up with a marked trail that took us into the heart of the rain forest. Like California’s redwoods further south, trees in the Quinault rain forest can grow  – really grow. The region is home to the world’s largest Sitka Spruce, Douglas Fir, Mountain Hemlock, Yellow Cedar, and Western Red Cedar – and there are plenty of others that, while not making the record book, are equally impressive. We marveled at these giants throughout the hike, along with the myriad waterfalls, bogs, ferns, and moss that form the bedrock of the rain forest ecosystem.

Our days followed a familiar pattern – find an area we wanted to explore, bring some water bottles and lunch, and try to stay dry. We headed deep into Olympic National Park along water logged trails with makeshift bridges that stumbled across remote lakes and rivers rich in wildlife. The Maple Glade Rain Forest Nature Trail provided a self-guided tour through some of the most extraordinary moss-laden trees you’ll find anywhere. The Kestner Homestead trail provided a glimpse not only of the wildlife but of the lives of people that tried to tame the wilderness and settle the area.

And for a change of scene we took a road trip through a 73-mile strip of Olympic National Park that protects the coast line. Along this haunting stretch of Pacific, glacier-fed rivers empty into the ocean, leaving behind scores of bleached logs and driftwood, brought down by the natural turnover of the rain forest, and the sometimes violent storms that regularly pass through the area in the non-summer months. 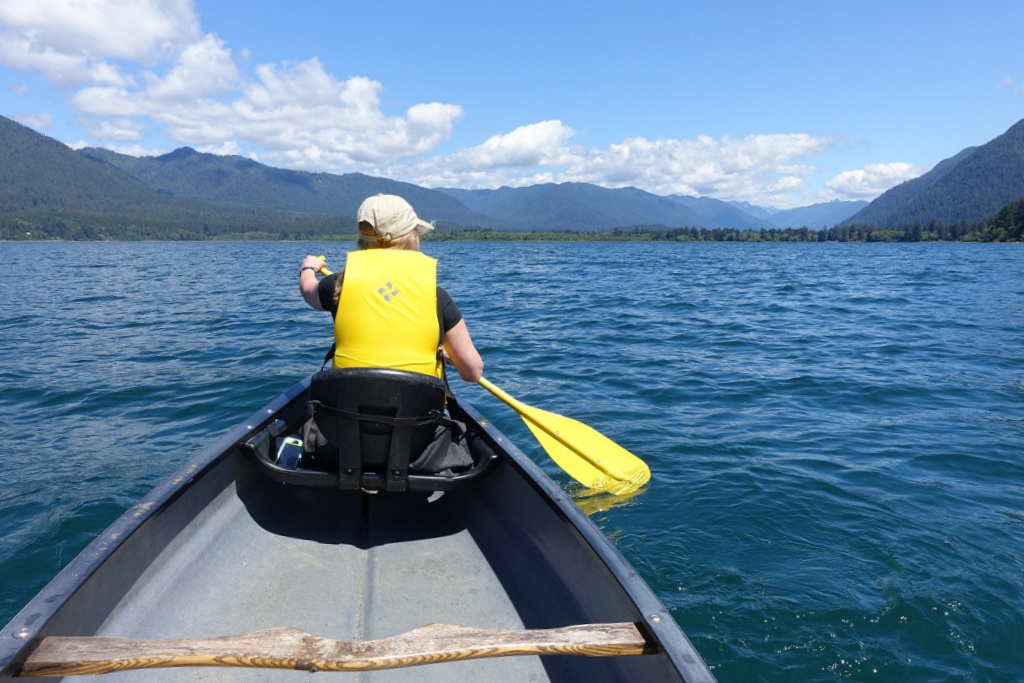 Lake Quinault Lodge staff assured us that the rain would not last and they were right. The sun eventually came out and stayed out. We took advantage of the warmth and dry conditions to get out on to the lake and give our legs a break. From our canoe we got a full sense of the impressive parade of peaks surrounding Lake Quinault lake and the still snow-capped peaks of Olympic National Park to the east.  It was an experience no amount of traffic or rain could dampen.