It’s not often that you can be at a bar and honestly say the drinks are so bad you’d prefer cough syrup. It’s rarer still that you can make that statement in a bar that touts itself as one of the best in the world. Ok, I had a cold, but you get the point. 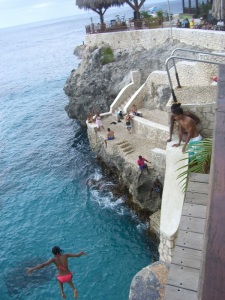 In fairness to Rick’s Cafe (in Negril, not Casablanca), it’s a pretty cool bar. If the criteria for being one of the best in the world is a fantastic outdoor location, drop dead sunsets virtually every night, and pretty girls jumping off a cliff into crystal clear waters, I’d give it high marks. Even during the slow afternoon hours it’s a nice place to hang out, eat some OK food, and have a drink.

Just steer clear of the “specialty drinks.” When I’m at a bar getting gouged by overpriced cocktails, my demands are modest but uncompromising: drinks must taste good (a balanced mix of interesting flavors) and alcohol must be discernible to the degree that justifies the mark up. On a recent trip to Rick’s, drinks failed miserably on both these counts.

On the surface Rick’s offerings were tempting – playful names headlining exotic liqueurs, fruit juices, and mixers blended with Jamaica’s finest rums. We should have gotten our first clue that something was amiss when we eyed the bar staff not using the fancy displayed mixers but purple and green goop in plastic jugs.

We ordered a Jamaican Rum Runner and a Jamaican Me Crazy. When my wife – who has a very sweet tooth – took a sip of the Rum Runner she described it as a sugary knife sliding down her throat. Actually to say it was sugar would do an injustice to cane. It seemed little more than water, ice, and a ton of high fructose corn syrup mixed with red dye number five.

My Jamaican Me Crazy – which promised three types of rum, banana liqueur and pineapple juice – was only marginally better. It didn’t taste like anything recognizable and seemed to be missing that all important alcoholic component. The Purple Jesus concoctions of my misspent youth were easier going down.

Out of frustration, my wife abandoned her first drink (and the menu) and chose to self direct her drink’s components. Make it simple, she told the waitress – cranberry juice, soda and vodka. We’re not entirely sure what we got but we think it was some kind of watered down fruit punch, again apparently missing the alcohol as well as the tell-tale carbonation of the soda.

We wanted to give Rick’s the benefit of the doubt and leave convinced that we had at least been served alcoholic drinks. I don’t claim to be an expert on all things fermented but I have a good idea of alcohol feels about ten minutes after going down the hatch. We walked away from our table sober and $20 poorer.

To make up for our disappointment we sneaked in about 15 free minutes at the $75/ afternoon shaded cabanas before getting the boot. Rick’s is filled with these little diversions, which no doubt helped to elevate its status in the world bar rankings. Just stick to the Red Stripe beer. It’s a sure thing.