Negril has a bit of an identity crisis. It’s one of Jamaica’s most famous resort areas, but is not really very Jamaican, having been almost entirely consumed by the late 20th century tourism industry. Ganja-selling touts sell and smoke their product on the beach, but have to be cognizant of patrolling police and families enjoying Negril’s crystalline waters. I’ve seen people lying naked on parts of the beach – sometimes even walking up and down it – in an environment that sometimes resembles the family friendly beaches of the Carolinas. Raucous Jamaican-style dance hall parties compete with dinner time crooners belting our Kenny Rogers and Neil Diamond favorites.

Negril’s naughtier side grew out of visits to area in the late 60s and early 70s by intrepid, ganja- and pleasure-seeking draft dodgers and hippies. The region’s isolation, small local population, and beautiful beaches were fertile ground for such escapism. However, it didn’t take long for others to follow. Negril’s free spirit now competes with more than 30 all-inclusive resorts, attracting both hedonists and vacationing families alike. Negril is home to almost a quarter of Jamaica’s visitor accommodation and a significant portion of that number sits on Negril’s so-called Seven Mile Beach (it’s actually about four miles) just to the north of Negril town. When I first visited Negril with my family in the early 70s, there were only a handful of places to stay along Seven Mile Beach and fishermen sold their product directly to visitors. You can still buy great seafood in Negril but the fishermen are nowhere to be seen, replaced by jet skis, paddle boarders, and para-sailors. 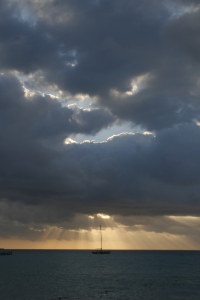 I’m now on my fourth trip to Negril, the third with my wife. It’s probably the pleasure-seeking side of Negril life that attracts us to the area, but we have no complaints about the quality accommodations and relaxing predictability of the place.  Every morning a similar ritual begins – beach chairs get pulled out and filled, the trinket and food touts begin their long parade up and down the beach, the ocean fills with swimmers and water sport enthusiasts, and the dope sellers begin their pitch, eyeing you down before running down their list of psychedelics. Reggae, the quintessential beach music, is everywhere, its rhythms practically in sync with the crashing waves and swaying palms. The sun always comes out on cue, temperatures top out in the mid-80s, and the sunsets never disappoint.

This natural beauty and inescapable laid back vibe likely allows the contradictory elements of Negril’s to coexist. Come, have fun, and above all, live and let live, and there is a place for you here. Yes, Negril doesn’t really know what it is, but that is what makes it such a popular place to visit.

This video I put together after our trip a couple of years ago but it still applies.