My original plan was to bike Hadrian’s Wall. Not actually on the wall, just somewhere in the vicinity. I had visions of cycling along a quaint, gently undulating British footpath running parallel to the ancient Roman barricade. I even learned of a cycleway that reputedly followed the length of the wall from coast to coast.

Some preliminary reconnaissance quickly dispelled any romantic notions about traversing the wall on two wheels. There was a Hadrian’s Cycleway running parallel to the wall, but this was mostly through country roads a few miles to the south. The path that followed the wall’s remaining fragments ran along fairly rugged terrain with steep climbs. If I wanted to travel in the footsteps of the Roman legions, I would have to hoof it.

Built roughly between 120 AD and 160 AD, Hadrian’s Wall originally stretched 73 miles across northern England and represented the northern frontier of the Roman Empire. Pestered by the unruly tribes to the north and recognizing there was a limit to empire, the Roman Emperor Hadrian drew a line in the sand, effectively saying this was as far as the empire was going to go.

For better or for worse, most of the Wall has disappeared, much of it removed over the centuries by local residents to build homes and churches.

It’s unfortunate that so much of the structure is gone, but it takes much of the guess-work out of where to visit and hike: The best preserved sections are well-marked and easily found in the roughly 20-30-mile stretch between the Cumbrian towns of Brampton and Corbridge.

And if you want to hike it, a well-worn 3 mile (one-way) path between the Steel Rigg parking lot and Housesteads Roman Fort provides arguably the best the wall and the north English country side have to offer.

I started at Housesteads, where parking and a visitors 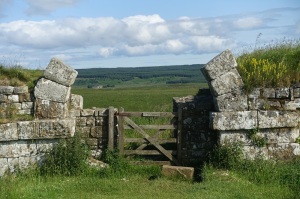 center provide a good base for the walk. Called Vercovicium by the Romans, the excavated Housesteads Fort sits atop a hill overlooking the rolling bucolic north England countryside and the ubiquitous sheep that feature prominently in this part of the world. The walk from the parking lot to the wall and the fort pretty much set the pattern for the day – exhausting climbs up steep hills rewarded by spectacular views amid millenia-old Roman ruins.

The wall represents the northern perimeter of the Fort. There aren’t a lot of signs pointing you in the Hadrian’s Wall footpath but it’s not hard to determine where the fort ends the wall begins.

A pathway follows the original wall but only fragments of the original structure remain. The most interesting relics are the milecastles, ancient Roman guard posts that have been carefully excavated and now stand as a striking reminder of the Roman legacy in the area.

Walking the wall in these parts is all about the craigs and the gaps. This isn’t for the weak kneed or light of heart — it’s a steep up and down most of the way. The craigs provide spectacular views of the wall and its surroundings, particularly if you’re lucky enough, as I was, to arrive on a rare sunny day. In the gaps you find many of the remaining Roman milecastles, as well as Sycamore Gap, whose eponymous tree starred alongside Kevin Costner and Morgan Freeman in a scene from the film Robin Hood, Prince of Thieves.

Once I reached Steel Rigg, or at least the outlook overlooking Steel Rigg, I was faced with the prospect of scrambling down into another gap, then turning around and climbing back up. I chose to stay put, take in the view, and save my knees the pounding. I still had to walk the three miles back to Housesteads Fort.

If nothing else, the hike home provided the opportunity to double the calories expended as well as take in the wall from the opposite perspective. My Garmin device  mapped about 800 feet of elevation gain across the 6-mile walk. Not bad for a relatively short jaunt across the north English countryside. Combine that with carefully preserved fragments of a two-thousand year old empire and you’ve got the makings of a great day out for heart and mind. 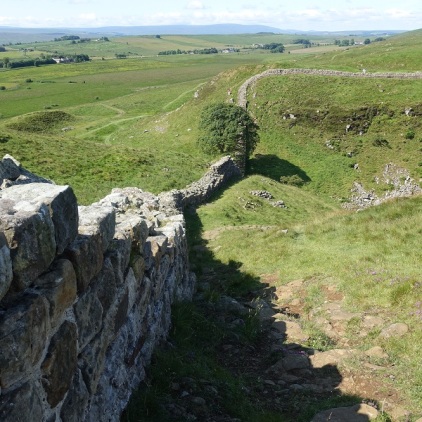 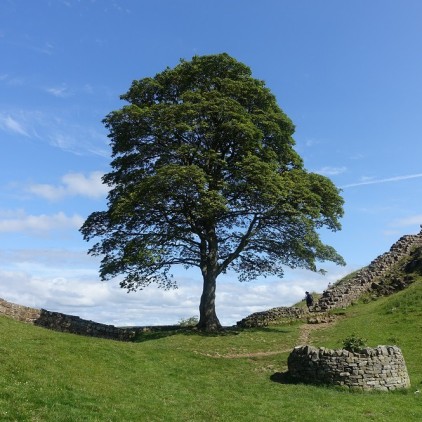 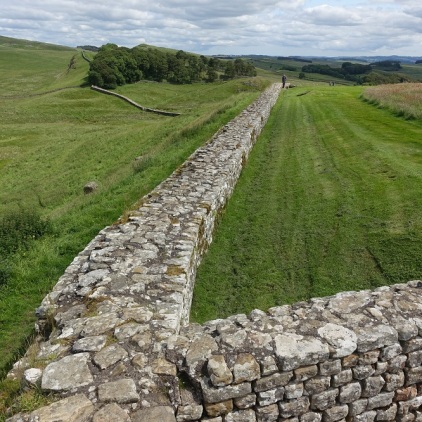 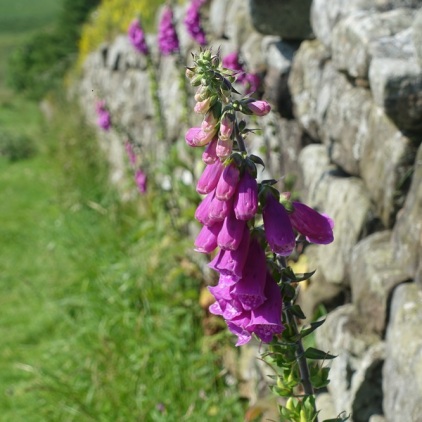